When it comes to visualizing gore and violence on (and off) the screen, not much holds a candle to fake blood. Most recently, It Chapter Two has made headlines for its blood use: at least 4,500 gallons of fake blood was used to traumatize Jessica Chastain’s character, Beverly Marsh. For some perspective, Stanley Kubrick's The Shining used nearly 300 gallons for the famous elevator scene. However, Fede Alvarez, director of the 2013 Evil Dead remake, claims to have ordered a truck with 50,000 gallons of blood…for just one scene.

While we most often talk about fake blood as used in films, that’s not where the prop got its start. A famous Parisian theatre, the Grand Guignol, was known for its horror shows and terrifying performances. From its opening in 1897 to its closing in 1962, bloody effects were at the climax of the popular horror plays.

The theatre had its own secret recipe for its stage blood, which is believed to be a heated mixture of carmine pigment (derived from insects) and glycerol.

With the advent of film brought new challenges for the creation of fake blood. Visually, a more realistic-looking color is preferred. However, for these black and white films, the more realistic stuff didn’t provide the right contrast to look real on film. These early filmmakers found a workaround in the form of a delicious confection: chocolate syrup.

Hershey’s chocolate syrup had the right viscosity to look and behave like real blood and its dark color provided a nice contrast on film. Alfred Hitchcock used chocolate syrup during the filming of Psycho because it had the right consistency, especially for the shower scene. While this kind of blood wasn’t a new concept, the plastic squeeze bottle was, and it helped make the “blood” even easier to work with. George A. Romero’s 1968 classic, Night of the Living Dead, also used Chocolate Syrup (especially for corpse-eating). 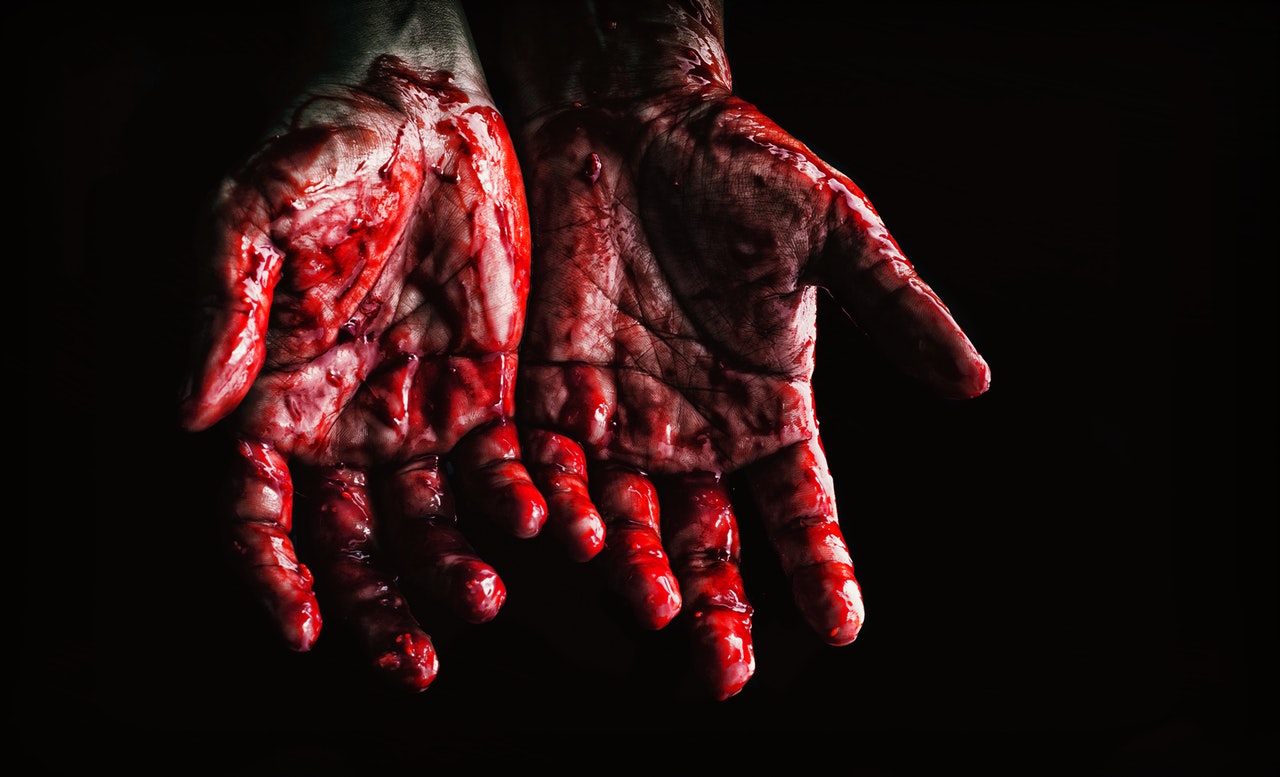 When film moved away from black and white to color, filmmakers had new challenges to face: not only did the blood have to have the right consistency, now it had to have the right color, too. Early Technicolor horror films, such as The Curse of Frankenstein (1957) and Horror of Dracula (1958) utilized blood splatter, but the blood was a very vibrant color and almost cartoonish in its brightness.

As the first splatter film, Herschelle Gordon Lewis’ Blood Feast (1963) needed a lot of blood. And given the premise of the film, the fake blood also needed to be safe for consumption. H.G. Lewis’ recipe for edible fake blood was simple: red dye and Kaopectate (an antacid and anti-diarrhea medication originally made with kaolinite and pectate).

“Kensington Gore” was the trademarked name for blood used in film and theatre during the 1960s and 1970s. Today, it is often used as a generic term for stage blood. Kubrick specifically used Kensington Gore in The Shining.

Kensington Gore really set the standard for fake blood made with a sugary syrup base with food dye. But if we’re going to talk about fake blood, we have to talk about Dick Smith because his DIY blood recipe, while technically poisonous, is one of the most famous.

Smith, known as the “Godfather of Makeup,” was an American special make-up effects artist best known for his work on famous films such as The Godfather (1972), The Exorcist (1973), and Taxi Driver (1976). He put his own twist on the syrup-based blood with the addition of methylparaben, a preservative. He also used a photographic wetting agent that changed the viscosity of the “blood” and allowed it to seep into clothes, as real blood would. However, this is also what makes the recipe poisonous, therefore making it unsuitable for any application where ingestion may occur.

Ehler red and yellow pigments are not available anymore, so some recipes will add Zinc and use red and yellow food dye instead. To make this recipe less poisonous, you can use a food-safe emulsifier/wetting agent such as liquid lecithin instead of the Photo-Flo.

Another way to make a less toxic, edible blood is to go the Sam Raimi method. For any low-budget filmmaker looking to make a horror movie, you likely need a lot of blood, and you probably need it to be very, very cheap and DIY-able. For the original Evil Dead (1981), they needed just that. Like Dick Smith’s recipe, The Evil Dead blood relies on corn syrup as the base. But to make affordable blood that still looked good on camera, Raimi and makeup and effects artist Tom Sullivan used non-dairy coffee creamer in their recipe. You can find the recipe in Bruce Campbell’s autobiography If Chins Could Kill: Confessions of a B Movie Actor.

Many movies and television series still rely on these recipes (or some derivative) for their bloody visual effects. However, others are turning to a cleaner method of gore: pixels. CGI blood is the go-to for directors who want to keep things clean and have more control in post-production. Famed director David Fincher is well-known for preferring CGI blood effects over practical ones and can be seen in his most popular movies like Zodiac and Fight Club. Whether or not CGI blood looks good or not is largely a matter of opinion.

Whether you’re hoping to make a low-budget film with plenty of gore, or simply want to amp up your Halloween party, we have many of the ingredients you need to create your own very own buckets of blood. We offer Red, Yellow (no.5 and no.6), and Blue food-safe dye in bulk quantities as well as corn starch and lecithin, depending on which recipe you follow.